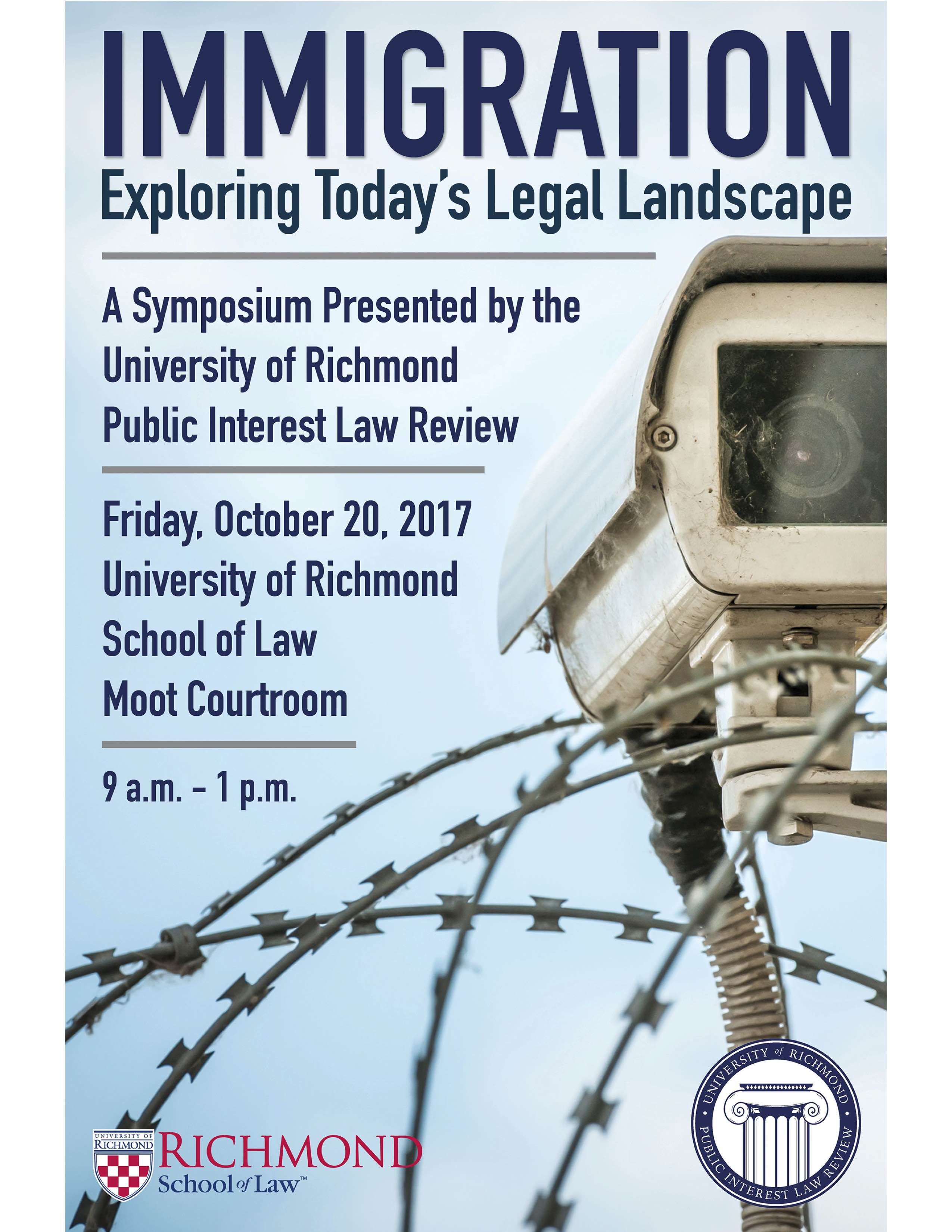 University of Richmond School of Law

9:10 AM - 9:40 AM: Keynote Speaker: Shahan Mufti speaks about his family’s own immigration journey, providing an in-depth case study of U.S. immigration

9:50 AM – 10:24 AM: Jason Cade Lecture: Sanctuaries and Legitimacy in an Era of Mass Immigration Enforcement: Prof. Cade lectures on immigration sanctuaries and then the laws around them

10:24 AM – 10:58 AM: Lakshmi Sinha Lecture: Economic Impact of Immigration Regulations: Ms. Challa overviews DACA’s effect on the economy and immigrant entrepreneurship in Virginia

11:07 AM – 11:31 AM: Margaret Hennessy Talk: Challenges of working with Immigrant Farmers in the Trump Administration: Ms. Hennessy overviews the current challenges and fears migrant workers face right here in Virginia

11:55 AM – 1:00 PM: Panel Discussion: The Life of an Immigration Attorney: The panel, led by William Benos, will do a deep dive into the current life of immigration attorneys, touching upon the challenges and virtues of the job

Shahan Mufti is a professor of journalism at the University of Richmond. Before he joined the University in 2012, he worked as a full-time journalist. His work has been published by Harper’s Magazine, Wired, The New York Times Magazine, Bloomberg Businessweek, The Wall Street Journal, The Atlantic and other publications. His first book, The Faithful Scribe: A Story of Islam, Pakistan, Family, and War, is a work of narrative non-fiction based on his years of war reporting from Pakistan. It is the One Book, One Richmond selection for this academic year at the university. He is now working on his next book about the 1977 Hanafi Siege of Washington, DC that explores the various traditions of Islam and the many communities that constitute America's Muslim population today.

Jason Cade is an Associate Professor at the University of Georgia School of Law, where he teaches immigration law and directs the Community Health Law Partnership Clinic (Community HeLP), which provides holistic legal services to low-income residents in the Athens area through embedded partnerships with community health providers. Prof. Cade’s recent scholarship explores intersections between immigration enforcement and criminal law, the role of prosecutorial discretion in the modern immigration system, and judicial review of deportation procedures. Prior to entering academia, Cade represented noncitizens in a wide range of immigration proceedings and family court matters while working in both small firm and nonprofit settings.

Lakshmi Challa is the managing attorney of Challa Law Group and she also serves as senior counsel in LeClairRyan’s Richmond office. She has practiced immigration law for over 20 years, representing a variety of clients including corporations, athletes, universities, entrepreneurs, and renowned chefs. For nearly a decade she acted as Special Counsel on immigration for the Virginia Office of the Attorney General. She was invited by the U.S. Department of Commerce to present on immigration options with Department of State officers. Ms. Challa served on former President Obama’s White House Roundtable for Innovation and Immigration. She is deeply invested in her community and has been awarded many honors as a result of her service, including the YWCA 2016 Outstanding Woman in Business Award, Virginia Lawyers Weekly Influential Women of VA honoree, Henrico County Community Leader of the Year, and the Women Who Lean in Award at the LIVE2LEAD Conference.

Madeline Taylor Diaz is an immigration staff attorney at Ayuda. Ayuda provides direct legal, social, and language access service to low income immigrants in the Washington, DC metropolitan area. Ms. Taylor Diaz has extensive experience working with immigrant children and families in their immigration cases. Ms. Taylor Diaz began at Ayuda as an Equal Justice Works Fellow sponsored by Greenberg Traurig, LLP, providing legal services to immigrant children. She has also served as the interim managing attorney of the Virginia office of Ayuda. She currently serves on the Supervised Visitation Advisory Board for Fairfax County. Ms. Taylor Diaz received her law degree from the Catholic University of America Columbus School of Law and her B.A. from the George Washington University in Latin American Studies.

Margaret Hennessy supervises a farmworker program for Legal Aid Justice Center in Charlottesville. She has been with LAJC since January of this year and has formed a team of lawyers and organizers that visits farm labor camps and other isolated workers’ communities throughout the state, addressing the legal needs of low wage immigrant workers. Previously, Margaret litigated farmworker disputes in Maryland, Oregon and Florida and worked in various legal service organizations on issues affecting foster children, seniors, and sweatshop workers. She also worked several years as a Mediator for special education disputes.

Bill Benos focuses his practice on strategic legal planning for internationally-based companies and individuals seeking to enter and do business in the United States. As founder of the firm’s Immigration Practice Group, Bill combines his business and immigration experience to advise international clients on matters involving the cross-border movement of personnel. Bill’s extensive experience in the immigration field includes representing business professionals with nonimmigrant visas, permanent residency, U.S. investments, and naturalization matters. He also deals with immigration compliance matters. Bill has served as Honorary Consul of Canada since 2004. A native Canadian, he has coordinated several diplomatic trips connecting Canadian enterprises with business leaders in the U.S. Bill has been an adjunct professor at the University of Richmond School of Law for the past 24 years, and he currently teaches an externship in International Business Practice and a course in Immigration Law. He is a member of the American Bar Association, the American Immigration Lawyers Association, and the Virginia Bar Association. Bill currently serves as Chair of the Maggie L. Walker Governor’s School Foundation. Prior to joining the firm, Bill practiced law in Canada. He received his LL.B. degree in 1982 from the University of Western in London, Ontario, and his J.D. in 1988 from the University of Richmond School of Law.

Tanishka V. Cruz is an attorney in solo practice at Cruz Law, a Charlottesville-based immigration and family law firm. She is also an attorney with the Legal Aid Justice Center, where for the past two years she has focused on the management of the Virginia Special Immigrant Juvenile Project, an award-winning collaboration between LAJC and pro bono attorneys across the state. The project has saved more than 150 refugee children from likely deportation. She currently supervises students in the Immigration Law Clinic, which LAJC runs in conjunction with the Law School. Cruz earned her B.A. from Temple University and her J.D. from the Drexel University Thomas R. Kline School of Law.

Naureen F. Hyder is the founding attorney of Hyder Immigration Law which was established in July 2015. Hyder Immigration Law is focused on assisting individuals, families and employers in every aspect of their immigration and naturalization needs and challenges. She earned a Juris Doctor (J.D.) degree in 2007 from the Dickinson School of Law of the Pennsylvania State University in Carlisle, Pennsylvania. Ms. Hyder was admitted to the Pennsylvania Bar in 2007 and practiced at the law firm of McNees Wallace & Nurick in Harrisburg, Pennsylvania through 2009. In Pennsylvania, she was a board member of the Junior Board of the YWCA of Harrisburg from 2008-2009. In 2010 she joined the Law Offices of Hyder & Overas in Richmond, Virginia, a full-service immigration law firm. Ms. Hyder was admitted to the Virginia State Bar in 2015. She is a member of the American Immigration Lawyers Association (AILA), very active with the Junior League of Richmond and also on the Young Women's Leadership Alliance board of the YWCA of Richmond. Naureen F. Hyder holds a Bachelor of Business Administration in Marketing and International Business from The George Washington University in Washington D.C.

Ashley Shapiro is the Immigration Resource Attorney for the Virginia Indigent Defense Commission. Ms. Shapiro conducts training for all public defender offices in Virginia regarding the immigration consequences of criminal convictions, and provides extensive case-specific consultations to individual attorneys. Ms. Shapiro completed multiple immigration trainings, including intensive in-house training with the Capital Area Immigrants’ Rights Coalition prior to beginning her position in Richmond. Prior to joining the Administrative office in 2016, Ms. Shapiro was an Assistant Public Defender in the Fairfax County Public Defender’s office for 4 years, and in St. Mary’s County, Maryland before coming to Virginia. In Fairfax, Ms. Shapiro handled hundreds of cases in each of the Fairfax County courts and numerous jury trials, including representing a large number of non citizen clients. Ms. Shapiro graduated with Honors from The George Washington University Law School in 2010. She was also a Thurgood Marshall Scholar, earned a Pro Bono Service Certificate, and was awarded a Shapiro Public Service Scholarship. Immediately upon graduation, Ms. Shapiro clerked for the Maryland Court of Appeals. Prior to law school, Ms. Shapiro graduated Summa Cum Laude from San Diego State University