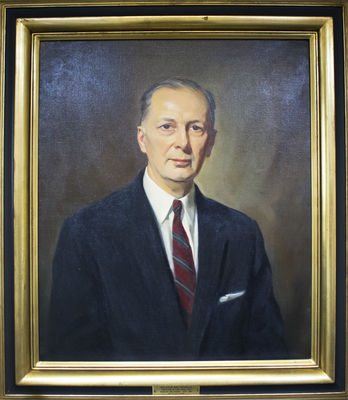 Dean Doubles first started out at the Richmond School of Law in Columbia Hall as a student and then full time teaching faculty for four years. He became the second official Dean of the Law School, following Montague, and served in that position for seventeen years. Dean Doubles was influential in forging a relationship between those at Richmond College and the Law School at Columbia Hall. Dean Doubles started the discussion on expanding the Law School size in terms of physical space. He also was able to maintain the Law School's newly appointed ABA and AALS accreditation throughout WWII. Dean Doubles resigned from the Law School when he was appointed in 1947 by Governor Tuck to be the Judge of Hustings Court of the City of Richmond, Part II.

Portrait Gifted By: Information not available