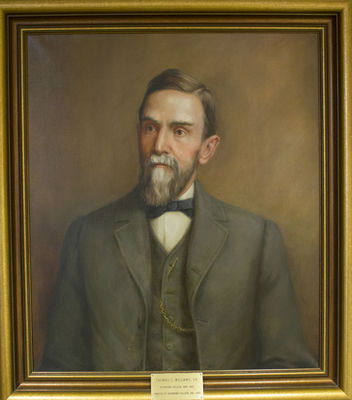 Although T.C. Williams Sr. was officially considered a Trustee of Richmond College, he would have been considered a Dean of the School of Law by today's definition. T. C. Williams Sr. is the one we have to thank for successfully reestablishing the Richmond College Law School after the Law School closed in 1892 due to insufficient funding. T.C. Williams privately donated enough money during his tenure on the Board of Trustees of Richmond College (1881-1890) to open the doors of the School of Law once again. The Law School has remained open since Williams' death in 1890 due to his family's action to fulfill his wish to see the law school firmly and forever established: by endowing $25, 000 towards the "T.C. Williams Professorship of Law."

Artist: Information is not available

Portrait Gifted by: Information is not available