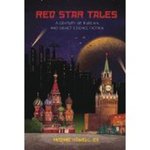 Red Star Tales: A Century of Russian And Soviet Science of Fiction

For over a century, most of the science fiction produced by the world’s largest country has been beyond the reach of Western readers. This new collection aims to change that, bringing a large body of influential works into the English orbit.

A scientist keeps a severed head alive, and the head lives to tell the tale… An explorer experiences life on the moon, in a story written six decades before the first moon landing... Electrical appliances respond to human anxieties and threaten to crash the electrical grid… Archaeologists discover strange powers emanating from a Central Asian excavation site… A teleporting experiment goes awry, leaving a subject to cope with a bizarre sensory swap… A boy discovers the explosive truth of his father’s “antiseptic” work, stamping out dissent on distant worlds…

The last 100 years in Russia have seen an astonishing diversity and depth of literary works in the science fiction genre, by authors with a dizzying array of styles and subject matter.

This new volume brings together 18 such works, translated into English for the first time, spanning from path-breaking, pre-revolutionary works of the 1890s, through the difficult Stalinist era, to post-Soviet stories published in the 1980s and 1990s.

School of Arts and Sciences

Read the introduction to the book by linking to the Read More button above.